A stock market crash is a sharp and unexpected decline of stock market prices for a very short period of time, usually accompanied by the decline of many other assets’ prices. As a result, most of the investors and speculators in the market realize significant capital losses. The losses themselves cause panic and fear among market participants, leading many investors to sell their stocks in a hurry and lock in their losses. This phenomenon is known as “panic selling” and it causes even greater declines in prices as the number of sellers outnumbers the buyers, this deepens the contraction and causes more losses, they cause more panic, etc. This way a stock market crash is usually a self-reinforcing process that is totally uncontrollable. 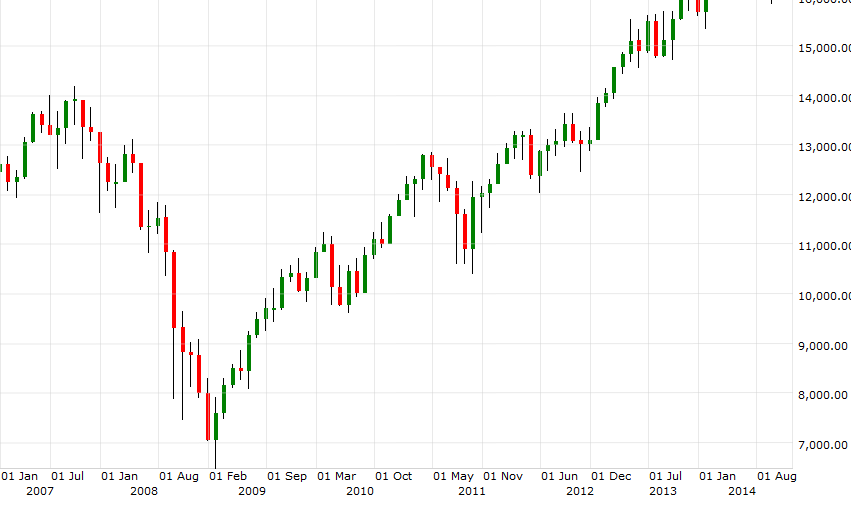 The crash of the Dow Jones index in 2007


Crashes are usually (but not necessarily) preceded by periods of economic growth, where stock markets have been experiencing record highs – making them overly susceptible to such crashes. When this happens, individuals and institutions alike begin investing large sums of money into the market without regard for the traditional methods for valuation such as dividends and earnings. This overvaluation then leads to an eventual crash when it becomes clear that there isn’t enough fundamental value to back up these high prices – leading to an investor sell-off and dropping prices quickly.

Long periods of expansion can cause so-called market bubbles. A market bubble can be defined as a sustained period of overvaluation in one particular asset or group of assets. During such times, prices become inflated beyond what could be considered normal amounts — oftentimes driven by fears or irrational hopes — and investors are quick to purchase large quantities of whatever asset happens to be inflating in price. This often leads to prices becoming astronomically distorted and jumping quickly as more people rush in to buy the “investment du jour”.

In order for a bubble to really occur, however, three conditions must be met: first, there must be an unsustainable increase in asset prices; second, investors must believe that the prices will keep going up despite impending losses; and third, once those first two conditions are met there must be enough individuals participating for the duration for the bubble to grow into any significant proportion — this is known as mass participation speculation.

See also:  Duration Of The Bear Markets And Percentage Drops of S&P500 During The Last Century

It is important to know that not every period of market rising is necessarily a bubble; bubbles develop only when prices are grossly inflated relative to their historic levels and end up falling drastically when they reach their peak. Market bubbles usually take various shapes during their course — they can initially increase slowly while producing steady profits at first then suddenly skyrocket afterward. After reaching its peak and creating more wealth than would be realistically possible over time, bubbles then rapidly decline as increasing numbers of investors realize the higher-than-normal levels are unsustainable and begin cashing out their holdings quickly forcing the price down drastically and creating panic among other holders who were caught unaware by this decline.

This is how very often stock market bubbles are followed by market crashes that bring all market participants quickly back to reality. A bright example of a market bubble and a subsequent crash is: 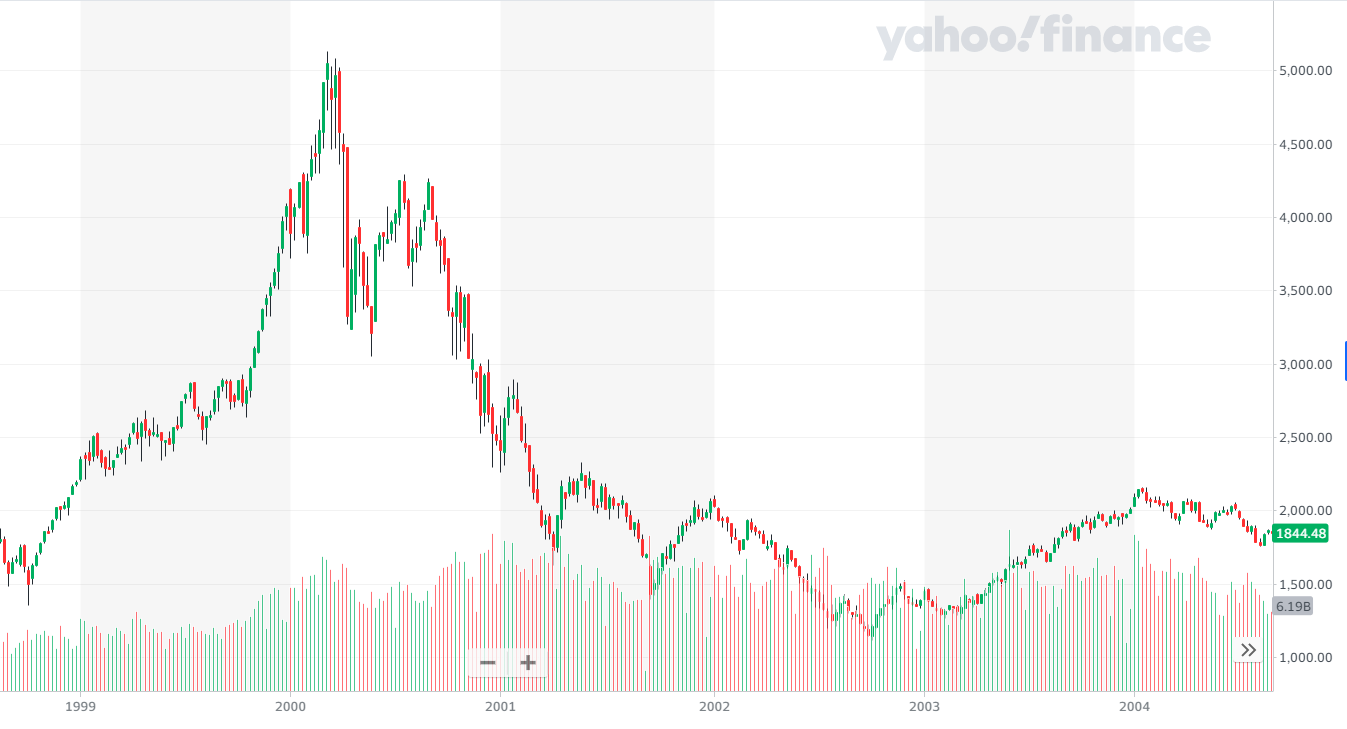 The Dot-Com Bubble, which began in the late 1990s, was one of the most recognizable booms and busts in modern market history. It gave rise to thousands of companies that promised to revolutionize the way we live, work and play by leveraging the new capabilities of the internet. Unfortunately, many of these business propositions were too ambitious given the nascent state of technological innovation at the time, leading to an enormous surge in speculative investment and subsequent stock market crashes.

At its peak, a single Dot-Com company without any profits or even without revenues could easily achieve a market capitalization larger than conventional firms with decades of established success. This was due to investor enthusiasm and confidence in the potential for these new companies to make money by capitalizing on their high-growth model. This phenomenon was dubbed the Dot-Com Fever, as investors backed businesses with only a vague sense of how their technologies would generate profits.

See also:  What Is The Dogs Of The Dow Investment Strategy And How To Follow It?

The bubble famously burst in early 2000, as stock prices plummeted from their incredible highs due to concerns about overvaluation and large losses incurred across the entire industry. The Nasdaq index dropped nearly 77% and many internet companies were completely wiped out. Many investors were wiped out by these losses and many companies saw their entire operations ground to a halt as funds dried up. This situation was compounded by institutions that had relied heavily on these investments for financial security being hit hard during the dot-com recession.

Another example of a bubble followed by a big market crash was the subprime mortgage crisis that happened in 2007-2008 and cause the great recession after that. You can read more about that here: https://en.wikipedia.org/wiki/Subprime_mortgage_crisis

Stock market crashes are social events caused by both, economic conditions and human behavior. Usually, a crash happens when economic participants have far from reality perceptions and assessments of the situation, which usually causes stock market bubbles. It is not that easy to define the “far from reality” situation, though. There are no clear, objective, and specific reasons for crashes and that’s why they are hardly predictable. But when they happen, they are clearly recognizable by a sharp and steep decline of market prices for a very short period of time caused by panic and fear.

Market crashes are not only harmful to stock market participants, but they also affect the whole society causing economic crises. Usually, a crash is followed by a depression or a recession, which causes higher unemployment, bankruptcies, bank failures, falling prices, and lower living standards.

So, what are stock market crashes?

Crashes and crises are the big flaws of capitalism. Even modern economic science is not able to stop and fully explain economic crises. This raises some serious questions about the degree to which the theories are applicable to the real world. According to free market theory (the backbone of modern capitalism), the market has to correct itself automatically, if it is not in equilibrium. This way a crisis would be avoided, but this doesn’t seem to work in reality. Not only the market doesn’t correct itself, but also the contraction could self-reinforce itself. This is what has been happening for the last several years since the mortgage crisis began in 2007. Proof for this is also many other economic crashes happening every several years.

See also:  What Is Dow Jones Industrial Average? The Basics Of Stock Market Indexes - For Dummies

A major concept explaining stock market crashes and economic crises is George Soros’ Reflexivity theory, which I find the most relevant one. I am highly influenced by his work and will try to explain some of the major crashes using Soros’ arsenal of knowledge. Read more about this great investor here, and about his Reflexivity theory here.

Stock market crashes have very common features and at the same time, there are many differences between them. Here on this site, I will analyze some of the major ones and will try to find the similarities and differences between them. Crashes could happen not only in stock markets but in any free market, including real estate market, commodities market, and any other. A great example of this is the tulip mania, which turned into a great crash in tulip pulps’ market prices, wiping out many people’s fortunes. It really doesn’t matter what the market is, all market crashes are similar to each other. Every one of them is caused by super optimism, irrational behavior, greed, and fear.

What Is Dow Jones Industrial Average? The Basics Of Stock Market Indexes – For Dummies

How Does The Stock Market Work – For Dummies

What Is The Stock Market And How Does It Work? A Simple Definition for Beginners