Which Is The Oldest Currency In The World

The British Pound also called ‘pound’, ‘sterling’, or ‘pound sterling’ is the official currency for all payments in the United Kingdom and a few other territories. Its international abbreviation is “GBP”, which comes from Great British Pound and its currency sign is (£). The symbol derives from the Latin word “libra”, which meaning is “pound”. One pound is equal to 100 pence ( p ) since the “decimalization” in 1971. The pound is part of the sterling zone, which also includes the Isle of Man, Jersey, and Guernsey, and is made up of £1, £2, £5, £10, and £20 notes, alongside coins in denominations of 1p, 2p, 5p, 10p, 20p, 50p, £1 and £2.


The British pound is the oldest currency in the world

The British pound is the oldest currency (fiat currency) in the world, and it’s still widely used today. Its existence began in the late 8th century. It participates in more than 12 % of all transactions on the foreign exchange market (FOREX). This makes the currency the fourth most used in the world after the US dollar, the Euro, and the Japanese yen. Because of its common use, the sterling is used as a reserve currency by many countries in the world. It’s the third most used currency for this purpose, after the Euro and US dollar. 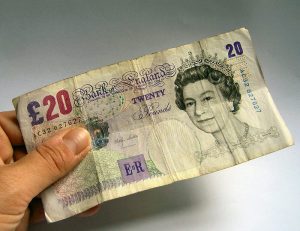 A banknote of 20 GBP

The UK is among the last of Western Europe’s major countries that have not adopted the Euro (EUR) – the currency of the European Union (EU). Therefore, the pound is the legal tender for all payments in the United Kingdom. That means that a debtor could not be successfully sued if she/he had paid in legal tender. This doesn’t mean that this is the only currency used for payments, but this is the currency in which a payment cannot be refused by any kind of creditor or the government in the UK.

The British pound is a freely traded currency, and its currency rate fluctuates, depending on the supply and demand of pounds, which themselves are determined by many other macroeconomic and political factors.

The Pound Sterling And Fiat Money

The value of the pound is backed by the government, no gold stays behind it. This means that the pound has a value just because the authorities say so. There is a law that defines the pound as “legal tender” and only this makes the little-colored sheets of paper valuable. Previously, the pound was backed by gold during the period of the Bretton Woods agreement, according to which the sterling was pegged to the US dollar, and the dollar was pegged to the gold. Therefore for a certain amount of pounds, a certain amount of gold could be redeemed. This system took apart in 1971 and since then the value of the pound is free floating.

See also:  What Is Mad Mimi's Start Up Story - An E-mail Marketing Company Started 100% From the Ground

The issue of the physical pounds (banknotes and coins) is handled by the Bank Of England which is also referred to as “The Central Bank”. Also, 7 other banks in the UK have the right to print their banknotes.

Most recently, the Brexit referendum and subsequent political wrangling has caused significant uncertainty in the value of the pound, leading to a period of extreme volatility in its exchange rate. The pound fell sharply against the US dollar and the euro, and despite its gradual recovery, the instability of the pound due to the Brexit uncertainty is still being felt. On top of this, the increasing tensions between the UK and the EU are making the situation increasingly unpredictable, and are likely to remain a factor in the value of the pound for some time to come.

It is therefore extremely important to understand the fundamentals of the British Pound and to monitor its value closely. This is essential for both individuals and businesses who trade internationally or travel to the UK, as the exchange rate is a major factor in the cost of goods and services. With the right understanding, anyone can be better prepared for any sudden changes in the value of the pound and the potential impacts that this could have on their trading activities.

World Wealth Distribution And Income Inequality In The World
See also:  Google Business Listing - What It Is and How To Get One