Ryland Goldman – The 7 Years Old Entrepreneur Who Started A Restaurant

Ryland’s Restaurant is a cool place to have a snack. People really like it and the food there is tasty. The business has a big potential for growth but the owner and the manager of the venture has some restrictions from mommy and daddy… Pretty understandable, having in mind that Rayland Goldman is just a 7-year-old boy… Actually, the kid has been thinking about founding a restaurant since he was just 3 years old, and after the Goldman family changed their house, Ryland decided to make his dream happen. His new home happened to be on a busy street, where there were lots of walkers during the day. The young entrepreneur spotted potential in them, he wanted to sell them some meals. The parents and their children heading to the nearby school every morning are the main target customers. So, this is how his little restaurant opened its doors. The boy gets up early in the morning to prepare some food like brownies and muffins. He goes with his father to buy some Starbucks coffee, milk, and orange juice, which he offers, too. He has even created his own menu on his home computer. This is how the young guy has made his dream come true. He is bringing money home at 7. But this is not the whole story… Ryland is also a boy, who loves charity causes. He has decided to donate half of the money earned to his elementary school. So far he has already given several hundred dollars to this cause.

Ryland made this happen all by himself. Not only his parents didn’t help him, but they have the opposite thing to do. The boy wants to do his business more and more and his mom and dad struggle to make him pay the needed attention to school and homework. He is just a little kid after all… 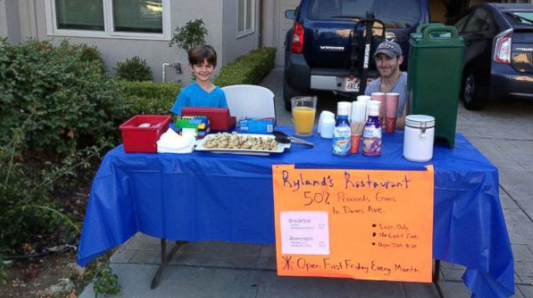 The atmosphere at Ryland‘s Restaurant is welcoming and inviting, and the staff is just as friendly and knowledgeable. Whether you are stopping in for a light lunch or a romantic dinner, you will be met with smiles from the restaurant‘s passionate staff and enveloped in an atmosphere of warmth and comfort.

This story is really cool to me… How do you feel about it.? It would be cool to drop your opinion as a comment below. Don’t hesitate to check some of our other entrepreneurial stories suggested below. You could even share a post or two with your friends on your best social site. Thanks!

How Mark Pincus Started Zynga – A Story Of A Serial Entrepreneur
See also:  Ephren Taylor - How a Teenage Entrepreneur Made Several Millions Online