What is your net worth excluding your primary home? If you are wondering what actually ‘net worth’ means, this is the wealth you own excluding all of your liabilities. This is the amount of money you would have if you sold all of your assets and paid down all of your debt. The calculation is pretty easy and everybody could, at least tentatively, assess her net worth right at the moment. So, how much is it? Do you have more than $10 000 of net worth? This doesn’t seem much, but did you know that 68.7% of all people in the world have less than $10 000 of net wealth? You will be amazed, that the average American at an age below 35 has a net worth of around just $4 500. These are some really interesting statistics showing that having money to spend doesn’t make you wealthy. You may lease a nice car, or you may have a 5-bedroom mansion bought by a mortgage, but… This is not wealth, because this actually decreases your net worth. Statistics show that people in developed countries, who own their homes are some of the wealthiest people in the world. Some of them are placed in the top 10% on Earth (if they have more than $100 000).

Another interesting fact about this is that, according to these statistics, just 8.4% of all people in the world own 83.4% of all world wealth. Where are you in this pyramid? It would be interesting to share your opinion and thoughts as a comment below… 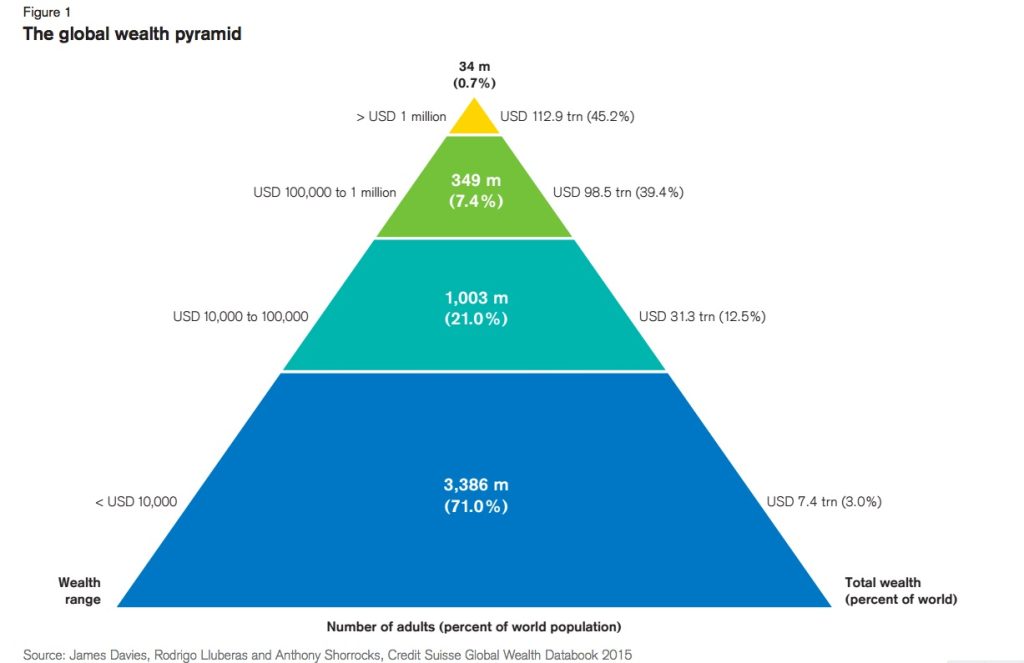 How is the world wealth spread among people…

As the world’s population grows and global economies become increasingly interconnected, the distribution of wealth has become a topic of great interest. According to research from Oxfam, the wealthiest one percent of people in the world own more than half of all global wealth, while the bottom half holds less than 1%. This immense disparity is a source of constant debate among economic thinkers and policymakers.

The consequences of an unequal distribution are wide-reaching. Those with greater access to resources have more opportunities for education and employment, allowing them to accumulate even greater wealth over time. Conversely, those without these same resources lack basic rights such as adequate healthcare or educational opportunities; this has been linked to poverty levels that remain stubbornly high in developing countries. Even within developed nations, there are huge disparities between urban and rural populations which can further impact economic growth in particular regions.

This problem cannot be solved overnight—but many initiatives have been launched around the globe with a goal to reduce inequality by creating more opportunities for all people regardless of socio-economic status or location. These efforts include programs that improve access to financial services such as microfinance programs, social safety nets like welfare assistance, and anti-poverty campaigns focused on providing skills training and job placement services.

If you think this post is interesting, please, consider sharing it with friends.

World Wealth Distribution And Income Inequality In The World

The Habits Of The Wealthiest People