McDonald’s History – How Ray Crock Founded The Company At 52

You may not know the name Ray Kroc, but you certainly know the business that he built. The brand name McDonald’s is known in every corner of the globe and it is Ray Kroc, who is the man that brought the golden arches to the masses. His story is truly one of the rags to riches and really shows what the entrepreneurial spirit can get you in America if you are committed to a vision. 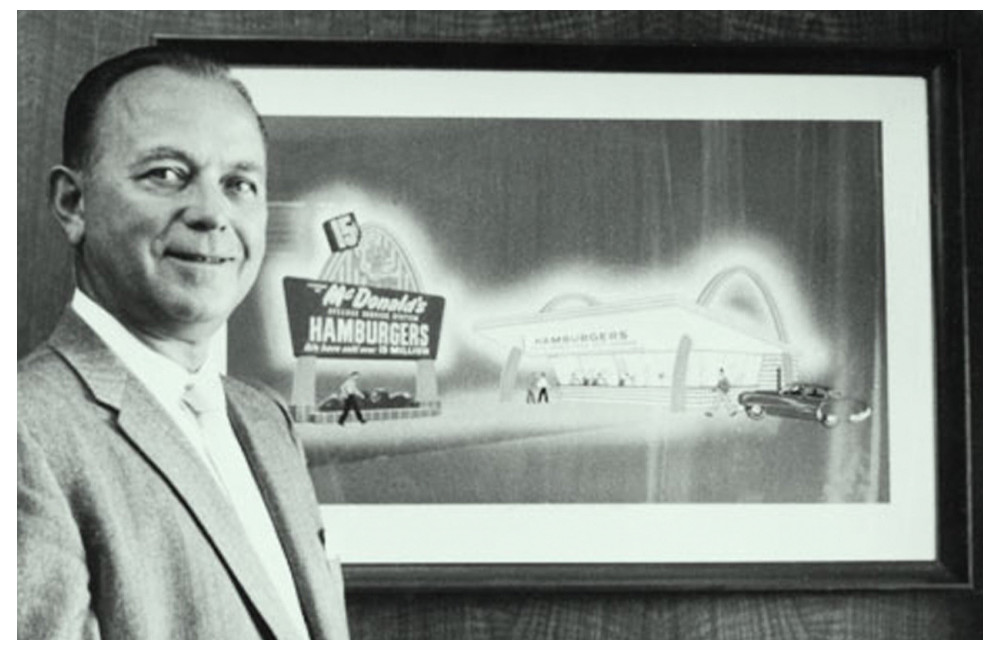 
Kroc was born in and spent most of his life living in Oak Park, Illinois. As the years went on Ray would have a lot of different jobs and even lied about his age to land a job working as an ambulance driver at the age of 15. Other jobs that Kroc had included selling paper cups and he even once was a DJ at a local rock station in order to make ends meet. He was a dreamer and he was a seller. He was always after the perfect product to sell, which would make him a very rich person. As luck would have it, Kroc would land his big break selling multi-mixers to restaurants across the country.

In the 1950s milkshakes were a big part of the beverage industry in the United States, especially at diners, restaurants, and teen-type hangouts. Kroc really found his niche selling the multi-mixers which allowed its users to make multiple milkshakes at once in order to keep up with demand. During the 50s Kroc actually did very well as a salesman and thought he would be selling those mixers for the rest of his career. It turns out that competition to the multi-mixer would actually work out to Ray’s advantage.

Have you ever heard of Hamilton Beach? Their products and appliances are all over kitchens and households around the U.S. They actually came up with a cheaper version of the multi-mixer that was outselling the original and thus Kroc’s selling business plummeted. In 1954, Ray was struggling with the decreased amount of orders. One day he received an order for 8 multi-mixers for a small burger restaurant in Southern California, in San Bernardino that also sold shakes. That was the restaurant of the Richard and Maurice McDonald brothers who wanted to have new mixers for their fast food business. By that time, Kroc still didn’t know, that this would be the most important order of mixers in his entire life because this sale would change him forever… It actually changed the rest of the world, too! When he visited the brothers, Kroc was amazed by the big crowd of customers, waiting patiently for their turn and buying big amounts of hamburgers, chips, and drinks. The first thought that came to his mind then was that if he could convince the McDonald brothers to expand their obviously profitable business, he could sell multi-mixers to each new branch that opened up, and he could make a fortune. Close enough, Kroc…

Having been in hundreds of kitchens, Ray believed the McDonald brothers had the best-run operation that he had seen in his life. The restaurant was very clean and modernized, mechanized, and the staff was professional and well-prepared. The typical hamburger restaurants by that time were usually gathering points for motorcycle gangs and wild teenagers, and Kroc saw in the McDonald brothers’ business a much more potential vision for a restaurant. He said once “In my experience, hamburger joints are nothing but jukeboxes, pay phones, smoking rooms, and guys in leather jackets. I wouldn’t take my wife to such a place and you wouldn’t take your wife either.“

In 1955, Kroc closed a franchise agreement with the brothers and opened the first McDonald’s franchised unit under his partnership with the McDonald brothers in Des Plaines, Illinois. The restaurant was demolished in 1985. Recognizing its historic and nostalgic value, in 1990 the McDonald’s Corporation acquired the stand and rehabilitated it to a modern but nearly original condition, and then built an adjacent museum and gift shop to commemorate the site now called McDonald’s #1 Store Museum.

After finalizing the franchise agreement with the McDonald brothers, Kroc sent a letter to Walt Disney. They had met as ambulance attendant trainees at Old Greenwich, Connecticut during World War I. Kroc wrote, “I have very recently taken over the national franchise of the McDonald’s system. I would like to inquire if there may be an opportunity for a McDonald’s in your Disney Development“. According to one account, Disney agreed under stipulation to increase fries from ten cents to fifteen cents, allowing himself the profit. Kroc refused to gouge his loyal customers, leaving Disneyland to open without a McDonald’s restaurant. Journalist Eric Schlosser, writing in his book Fast Food Nation, believes that this is a doctored retelling of the transaction by some McDonald’s marketing executives. Most probably, the proposal was returned without approval.

Kroc’s vision was that more and more people would want their food faster and he looked at McDonald’s as the perfect restaurant to satisfy the public appetite. He had a vision for McDonald’s that even the McDonald brothers didn’t see. Actually, Kroc had many disagreements with his franchising partners – the McDonald brothers – in regard to how the business should be run. The brothers wanted to operate just with a limited number of restaurants and didn’t want to expand. Kroc had much, much bigger plans. He wanted to conquer the US and actually own the brand and the business. This was why in 1961, with the backing of some investors, Kroc bought out the brothers for $2.7 million and the McDonald’s restaurant concept was now his own.

After this, we all know the expansion that McDonald’s has experienced since 1961. Kroc’s success all happened after he was 50 years old, making him a perfect example of how sticking with your dreams and always being on the lookout for the next big opportunity can pay some serious dividends.

Some Cool Facts About McDonald’s

See also:  Who Is Nick Vujicic? Do You Need Some Motivation? (Video)

McDonald’s employs over 1.7 million people in its 36,000 stores worldwide, making it one of the world’s largest employers. McDonald’s is also the most visited restaurant chain by children in America, and its ad campaigns, including the famous “I’m Lovin’ It” jingle, have made it a household name.

Since its inception, McDonald’s has adapted to changing consumer tastes and lifestyles by introducing healthier options like salads, wraps, and fruit smoothies. It has also incorporated technological advances like touchscreen kiosks and mobile ordering to make dining smoother and more efficient. The company’s sustainability initiatives, such as its commitment to serve only cage-free eggs and sustainable beef, have also set it apart from its competitors.

McDonald’s is committed to giving back to the communities in which it operates. Each year, McDonald’s and its franchisees host or participate in thousands of community activities through its Ronald McDonald House Charities, which support programs that improve the lives of children everywhere. In addition, McDonald’s provides resources to programs that promote career development, education, and a better environment.

McDonald’s has become an iconic symbol of convenience, affordability, and reliability. Its ability to stay current with trends and to give back to the communities in which it thrives has made it an enduring American favorite.

If you liked the article, please, try some of our beautiful social buttons at the top of the page and help us write many more cool articles like this.

How Brian Scudamore Founded ‘1-800-GOT-JUNK?’ With Only $700 of Initial Investment