The Startup Story Of Mu Sigma And Dhiraj Rajaram

Whoever thought a novel idea could be transformed into a multi-million dollar business venture in less than half a decade? Well, to one Dhiraj C Rajam, that’s a possibility because it’s exactly how he started his now world-famous Mu Sigma business analytics company.

To Mr. Dhiraj, becoming a businessman, let alone a successful one, was one of the last things he ever thought he would be. Prior to starting Mu Sigma in 2004, all he was interested in was learning and innovating new things in the field of business information technology, without the knowledge that what he was cooking was the perfect recipe for a global entrepreneurial phenomenon.


The name of the company derives from the Greek letters ‘μ’ and ‘σ’ which are used for the abbreviation of the mean and standard deviation in statistics. Dhiraj founded the company in 2004, in the United States, when he was just 30 years old. Previously he worked as a consultant at PricewaterhouseCoopers and Booz Allen Hamilton. In 2008, the company received its first round of funding of $30 million, from FTV Capital. The company mainly provides marketing analytics services that help businesses make decisions based on well-researched statistical data. 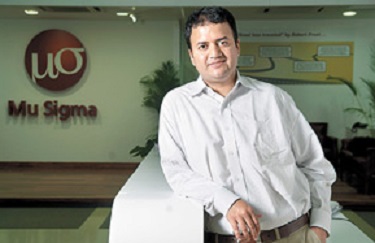 Dhiraj Rajaram – a picture from the site of the company – mu-sigma.com.

Even with bigger companies such as Accenture and IBM already in the industry and established prior to Mu Sigma’s startup, nothing seemed to stop Dhiraj from chasing his new dream. The beginning of the venture was humble but as the old adage would have it, the machine comes second to the brain behind it, because Dhiraj seemed to have projected the outcome of his plans before making the first step. While other companies would have business analysis and programming done by different people, Mu Sigma applied a totally different approach to recruiting all-rounded individuals called decision scientists (skilled in programming, professional analysis, and applied mathematics). This innovation was the critical ingredient that gave to Mu-Sigma and its founder the competitive advantage that made him successful. What’s the lesson here? There is always a way to improve an existing process or technology. And big companies are usually not so good at finding it…

This is how Dhiraj advertises his company on its website:

According to Mr. Dhiraj, finding people with all of these skills was not that easy, especially for his then-grassroots venture. But once the company started attracting customers and the right personnel, his journey to the entrepreneurial summit hasn’t taken a break, and he is yet to find his comfort zone.

Mu-Sigma is an India-based analytics and data sciences solutions firm that specializes in leveraging the power of Big Data analytic solutions to help organizations make better decisions. It has grown in leaps and bounds to become one of the world’s leading providers of data-driven solutions. The company offers analytics and data sciences services across a multitude of sectors including finance, insurance, manufacturing, retail, and telecommunications.

Mu-Sigma is a ‘first-of-its-kind’ consulting firm that focuses on helping clients maximize their business value by deploying their world-class expertise in tackling exceedingly complex analytical problems. Their team of highly talented data scientists helps solve problems by analyzing a wide variety of time series, text mining, and predictive models. They also offer a range of consulting services such as technology enablement, methodology development, and change management to enable the clients to derive maximum value from their existing datasets. It possesses proprietary algorithms that process historical data which enables it to make precise predictions about future outcomes.

The company also has strong ties with several research institutes around the world such as Harvard Business School, Stanford University, and the Massachusetts Institute of Technology (MIT). It actively encourages research amongst its varied teams working on diverse projects ranging from developing algorithms for marketing campaigns to building recommendation engines for large e-commerce players. In addition, Mu Sigma has also acquired various patents related to technology innovation in India as it strives to remain at the cutting edge of data science technology.

In short, Mu Sigma provides not just agile tools and data science services but an integrated approach that makes organizations competitively ready by getting them equipped with up-to-date insights based on its vast pool of expertise and a huge repository of datasets. Thus it is no surprise why Mu Sigma is seen as the go-to name when it comes to leveraging Big Data analytic solutions for making more intelligent decisions.

Today Mu Sigma has around 3 500 employees and around $250 million in revenue. Some investors value the private company as much as $7 billion. Today, the founder of the business Dhiraj C Rajam is 39 and owns a 49% stake in the company.

To read cool startup stories like this one, don’t miss checking out some of our suggestions below. If you liked this story, please share it, this will help our site produce more cool stories like this. Thanks.