How The Android OS Was Created – History

Currently Android is the most popular mobile operating system on Earth. The little green robot has conquered the world in a few years and has almost destroyed many of its rivals. Today, millions of Android devices are activated every single day and there currently are around 1,75 billion devices using Android nowadays (75% of all mobile phones). These are some astonishing numbers, having in mind that the first mobile phone using Android was purchased at the end of 2008.

First, let’s say some words about what Android (www.android.com) actually is. It’s a Linux-based operating system, especially designed and developed for mobile devices. It is completely free for its users – an open-source software – distributed under the Apache License. It was developed by the company Android Inc. many years ago but started gaining popularity after Google decided to provide some funding to the company and actually bought it in 2005. Being open-source software, Android has attracted a large number of developers and contributors, which additionally boosted its popularity. Currently, the market share of the operating system is around 75%, which is … HUGE.

The logo of Android

Back in October 2003, four guys named Andy Rubin, Chris White, Nick Sears, and Rich Miner decided to found a company with the main purpose – to make “smarter mobile devices that are more aware of its owner’s location and preferences”. It was named Android Inc. and this is how the Android revolution began. One of their first projects was an operating system for video cameras, but it was not as profitable as expected, because of the small market for such products. This is how the four entrepreneurs decided to switch to developing an operating system for mobile phones. The company was really small at the beginning and was trying to make really big leaps for its size, competing with Windows Mobile and other very popular OS like Symbian. After a year in the business, Android Inc. ran out of cash and was in front of bankruptcy. Fortunately, a friend of Andy Rubin – Steve Perlman, gave him $10 000 and actually saved the company, without even wanting a stake in it.

In 2005, the Internet giant Google Inc. bought the young company and changed its future forever. Having billions of cash at its disposal, the giant began investing decent amounts in developing a mobile phone operating system based on the Linux kernel. The new operating system was announced and presented in 2007. The first mobile phone running Android was released on the 22nd of October, 2008. That was the model produced by HTC – HTC Dream. Since then, the operating system has gone through many improvements and updates.  The latest version of the platform (by 05.2013) is Android 4.2 Jelly Bean, which has set new standards for mobile devices.

See also:  The Young Entrepreneurs Who Lived Illegally In A Classroom To Found "Forced"

Some Major Versions of Android: Android 4.4 Kit Kat was the fifth version of Android, released in October 2013. This version provided more control over the interface and user experience, enabling users to customize it to their own liking. It also added many features that are now staples of Android, such as improved support for printing, low power consumption, integrated Google Now, and a better performance mode. 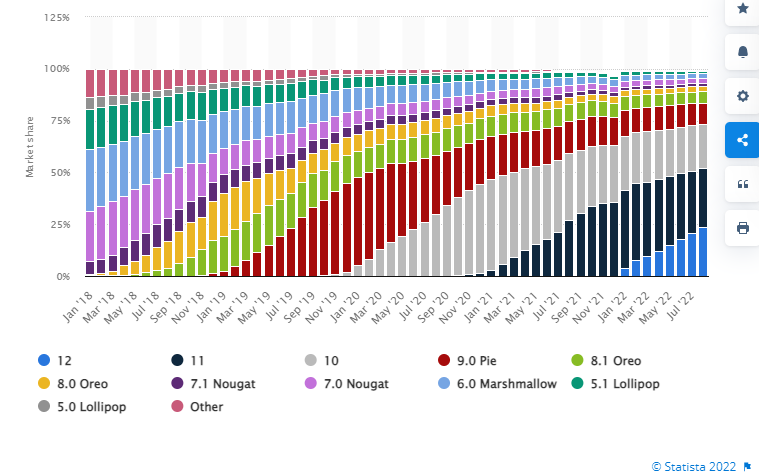 Android 5.0 Lollipop was the sixth version of Android and it was released in November 2014. This version brought with it a major redesign of the Android UI, featuring flatter graphics, improved multitasking, and a new ‘material design’ aesthetic. Lollipop also introduced support for 64-bit processors and augmented reality.

Android 6.0 Marshmallow was the seventh version of Android and it was released in October 2015. Marshmallow continued the trend of adding more power to the Android platform. It introduces a new feature called Doze which reduces battery consumption when your device is idle, a new permissions system, better support for fingerprint sensors and more.

Android 7.0 Nougat was the eighth version of Android and it was released in August 2016. This version added support for Multi-Window, improved performance and battery life, a faster and more responsive interface, improved notifications and a new Virtual Reality platform.

Android 8.0 Oreo was the ninth version of Android and it was released in August 2017. Oreo focused on improving the user experience through better performance, and better battery life thanks to background limits, and a new notification system allowing notifications to be grouped into ‘channels’.

Android 9.0 Pie was the tenth version of Android and it was released in August 2018. This version included a long list of improvements to existing features like the Digital Wellbeing dashboard to help keep track of your phone usage as well as introducing a new gesture-based navigation system and an AI-powered adaptive battery feature.

Android 10 was the eleventh version of Android and it was released in September 2019. This version introduced a system-wide dark mode, new privacy and security features, better gesture navigation, refined notifications, and a whole host of other refinements.

Android 11 was the twelfth version of Android and it was released in September 2020. This version focused on a number of improvements to existing features such as increasing the performance of the secure storage of biometrics and authentication methods. It also added a number of new features such as wireless Android Auto and improved support for foldable phones.

Android 12 is the thirteenth version of Android and it is currently in preview and is expected to go live in 2021. This version will focus on improved support for foldable and multi-screen devices, better performance and battery life, as well as a new design language with more use of vibrant colors.

Currently, there are more than 600 000 different free and paid apps and games on Google Play and this number keep growing every single day, due to the increasing popularity of the operating system. Another factor for this is that developing android apps has become a really lucrative business recently. One of the most popular games there – Angry Birds has made millions for its developers, even though it is sold at the price of only 99 cents.

Android is the most popular mobile OS, with more than 2.5 billion active users across the world in 2020.

Android has been the leading OS since 2013 and is the OS of choice for most people around the world. It is used on almost 75% of all smartphones sold worldwide and on an estimated 1.75 billion devices. This makes Android the undisputed king of the mobile OS market.

But what explains Android’s impressive success? According to many experts, it’s due to the fact that it’s open to everyone. Android is open-source, meaning that anyone can customize, develop and use it for their own needs. This has been a major factor behind its success and contributes significantly to its ongoing popularity.

See also:  Would You Believe It? James Casey Started UPS With Borrowed $100

Android also has a leg up on its competition because of its wide range of features and services. Its app store, Google Play, boasts an extensive library of apps ranging from productivity and entertainment to games and education. This powerful combination of features has contributed to Android is the preferred OS in the market.

Another key factor behind Android’s success has been its ability to stay up-to-date and competitive. Google has continually released new versions of Android that offer advanced features to users while integrating their existing services and products. For example, Android Oreo included all Google apps such as Google Assistant, Gmail, and YouTube. So, it’s no surprise that Android is always on top of the latest trends.

Finally, Android remains competitive due to its commitment to user privacy and security. Android has a strong focus on user safety, with built-in features such as Find My Phone and Google Play Protect to help keep your device secure.

Overall, Android usage statistics show that Android is a powerful, feature-packed, and reliable OS. It’s no wonder why it’s the number-one choice for many users across the globe.

The plans of Google are to make Android devices more accessible and reach the other 5 billion people on the planet. This has become more and more realistic, as the price of such a device has fallen to around $100 and is expected to further decline.

We hope you enjoyed this post. If so, please consider sharing it with friends using the social buttons. Thanks! If you would like to see a cool infographic about the history of the platform, you can see it here: